A New Book,”Palestine is our Home”

This remarkable new book, a project that the editor Nahida Halabi Gordon has worked on with great dedication for awhile, is available from Amazon.com. It begins with very personal and touching narratives of several Palestinian individuals from all the districts of Palestine who witnessed the Nakba (including one from the editor and another from Farah Munayyer), and ends with a chapter about Liberation Art in Palestine by Samia A.Halaby, and another chapter on the Origins of Traditional Palestinian Costume by Hanan K. Munayyer, all ending with thoughtful questions that challenges one to reflect and act for justice. It has had wonderful reviews from Hanan Ashrawi, Naim Ateek, Raja Shehadeh, Salman Abu Sitti, Ali Abunimah, and the Israel Palestine Mission Network of the Presbyterian Church (U.S.A).

On Monday, March 21, 2016, Mrs. Hanan Munayyer co founder and President of the Palestinian Heritage Foundation lectured at the City University of New York’s Middle East Department.  The topic of her presentation was

The Influence of Arab Lands on Textile Arts

The lecture focused on the impact of  Medieval trade items from Arab Lands that influenced European textile and other arts during the Renaissance.  Slide images showing ceramics, glass, leather and brass products  demonstrated how these items were produced in the Arab World and at a later date copies of such items were adapted and produced in Europe.  In support of this argument, several items were on display during the talk, including books, head gear, brass and embroidered dresses from both, Palestine and Syria. All the sources utilized in this discussion and presentation are from Western museum and academic publications.

Mr. and Mrs. Farah Munayyer cofounders of the Palestinian Heritage Foundation have recently come back from a trip Palestine. During their stay they visited the Bethlehem Museum where they had loaned for the past year a beautiful large exhibit of traditional Palestinian costumes (see previous Newsletters from last year), and updated the  display with another five antique dresses.  The dresses added to the exhibit represent the villages of Beit Dajan (white), Asduud, Beit Ania (Jerusalem), Bethlehem and the Naqab.

An Ardent Arab Nationalist Dr. Clovis Maksoud had Passed Away at 91

An ardent supporter of culture, Arab civilization, the Palestinian cause and the Palestinian Heritage Foundation had passed away on May 15 at the age of 91 in Washington DC., were he lived with his late wife Dr. Hala Salaam Maksoud. Not only that he supported the Foundation activities, he was sure to attend  its banquets held in New Jersey for the past twenty five years. At one of these banquets Dr. Clovis Maksoud was honored by the Foundation for all he has done on behalf of the Arabs everywhere. It is worth noting that Dr. Maksoud did review Hanan’s English book for the renown publication “The Washington Report on Middle East Affairs” and a clip of that review will be included in the upcoming Arabic version to appear soon.

On Friday, July 29, 2016 Mrs Hanan Munayyer, President and cofounder of the Palestinian Heritage Foundation spoke at the Palestinian American Cultural Center in Clifton, New Jersey. Mrs. Munayyer explained the Foundation’s activities and discussed her research leading to her sold out book “Traditional Palestinian Costume: Origins and Evolution”. At present an Arabic version of the book is being finalized and hopefully will be available to the public shortly. 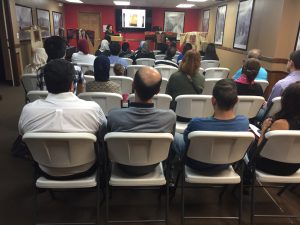 The Munayyer Collection has acquired an antique white Palestinian dress from the Jaffa region. The dress was bought in Jerusalem in the early seventies by Mrs. Sheridan Collins of Arlington Virginia and it comes from the village of Beit Dajan. It is embroidered with silk thread on hand woven white fabric. A second dress acquired from Mrs. Collins come from the village of Ein Karem outside Jerusalem. This second dress was bought by Sheridan’s mom in Jerusalem .


The third  is an antique nineteenth century dress from Bethlehem. This dress was acquired from a textile collector in Canada who bought it from an Estate sale in the area.

Few years back Mrs. Collins donated to the Palestinian Heritage Foundation several Palestinian dresses from the Asduud area. These dresses where purchased by her mother around the same time she bought her white dress.

Foundation to display at the United Nations in NY

The Palestinian Heritage Foundation will participate in the art display commemorating the Day of Solidarity with the Palestinian People at the United Nations Headquarters Lobby in New York during the end of November 2016. The display will be open through the beginning of January 2017. Selections from the Munayyer Collection along with other art pieces will be on display at that event during that period. It is worth noting that this is the seventh time where the Palestinian Heritage Foundation is being invited to display at such a prestigious organization on such a wonderful occasion. 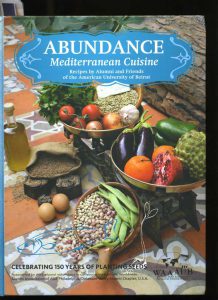 This Week in Palestine, Book of the Month.
http://www.thisweekinpalestine.com/details.php?id=3489&ed=197&edid=197

This Week in Palestine, October 2015
http://thisweekinpalestine.com/embroidery-as-a-source-of-palestinian-identity/

For the latest PHF updates and photos, visit us at: